The Deepwater Horizon oil spill resulted in an unprecedented commitment to study and better understand different aspects of the fate of oil released in northeast region of the Gulf of Mexico in 2010.  Countless research teams have spent considerable resources developing modeling tools, collecting and analyzing measurements, and performing scientific studies to understand different aspects governing the eventual fate of the oil. Together, these data have provided the basis for development of vastly improved modeling tools for tracking the distribution and chemical evolution of oil. But one area where our understanding remains quite limited is the role that microbes play in determining the eventual fate of oil and its impact on ecosystems, and how these processes depend on environmental conditions (hydrographic and biogeochemical properties of the water and circulation), hindering predictive capability.

The CSOMIO project is working to synthesize the technology, tools, and scientific knowledge of a group of individual investigators some of whom, since the Deepwater Horizon event, have immersed themselves in this study. The Consortium also brings to the study investigators who can fill critical gaps in our ability to numerically model the transport and fate of oil in coastal waters. The goal is to produce a comprehensive framework for simulating and understanding the role that microbes play in mitigating the impacts of oil spills. This model system will be an open source product that can potentially be run in a variety of locations with different physical forcing models. Expected outcomes include the ability to predict the impact of oil spills occurring under different temperature, hydrodynamic, and biogeochemical regimes, a consistently annotated synthesis of genomic and transcriptomic data for the Gulf of Mexico, and the elucidation of mechanisms relating hydrocarbon degradation to microbial community dynamics, flocculation, and sediment transport processes.

CSOMIO's open source model system will simulate and thus help us better understand the role that microbes plan in mitigating the impacts of oil spills. The system will be based on the following components:

Central to the coupled modeling system is a module to simulate oil in the ocean, the Deep-C Oil Model (DCOM), developed as part of the GoMRI-funded Deep-C Consortium.

Microbial biodegradation of groups of hydrocarbons will be simulated with the Genome-based EmergeNt Ocean Microbial Ecosystem (GENOME) Model.

Marine biogeochemistry (for trophic levels above microbes and ambient biogeochemical fields, e.g. O2) in the water column and sediment will be simulated by the Fennel model.

New gene-based model suggests, for microbes, it's not who you are but what you do 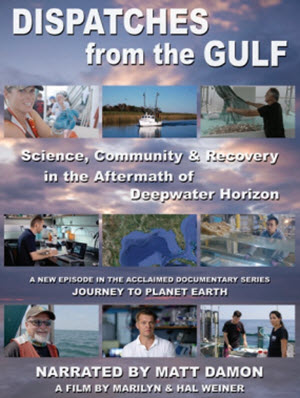 In April 2011, in the wake of an explosion on the Deepwater Horizon drilling rig, thousands of barrels of crude oil were flowing into the ocean daily from a damaged well about 40 miles southeast of the Louisiana coast. The flow of oil would continue for nearly three months while scientists and engineers worked to cap the Macondo well, and the disaster would eventually become the largest accidental marine oil spill in history. As the Deepwater Horizon accident was unfolding, scientists were among the many first responders worked feverishly to determine how much oil was being discharged into the environment and where it was going.

Dispatches from the Gulf is a documentary film, that features scientists working to better understand the effects of the Deepwater Horizon oil spill. Dispatches from the Gulf is the newest episode in the Journey to Planet Earth series and is narrated by Matt Damon. Major funding for Journey to Planet Earth was provided by the Gulf of Mexico Research Initiative – scientists working together to understand and restore the health of marine and coastal ecosystems.

Learn more about the documentary

Copyright © 2017 - 2023 All rights reserved. CSOMIO.org.
This email address is being protected from spambots. You need JavaScript enabled to view it.